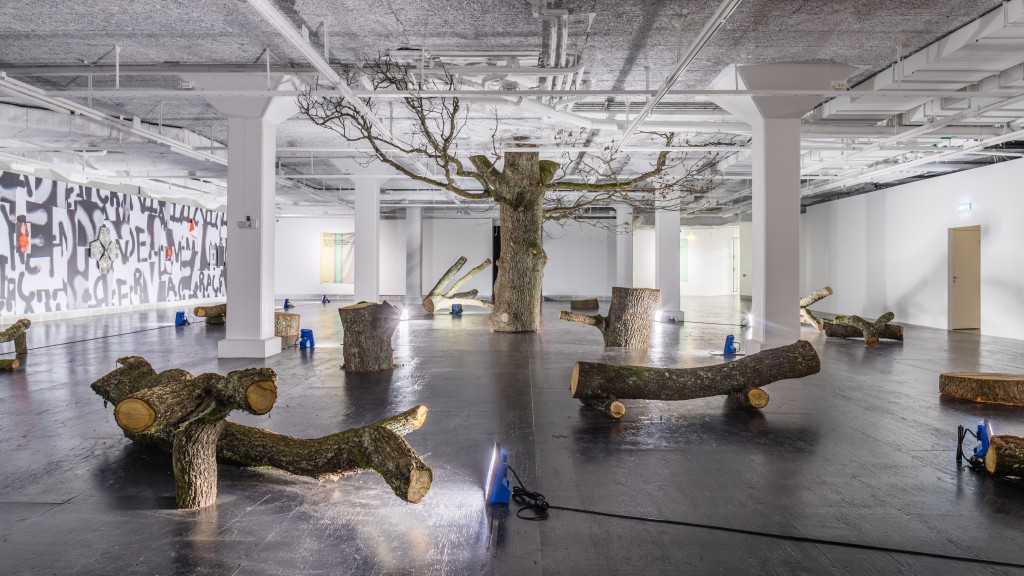 Artists Goldin+Senneby commissioned Khemiri to write a text to respond to their work. The result: a short story about regret, false names, mountain climbers, headlessness and Russian dolls. The story will be given a 3D form in the Goldin+Senneby exhibition opening at Tensta Konsthall.

The short story was published by Dagens Nyheter (Swedish).

Standard Length of a Miracle is a mutating retrospective by Goldin+Senneby. Over the past ten years, the Stockholm-based artist duo has explored virtual worlds, offshore companies, withdrawal strategies, and subversive speculation. In a unique and subtle way, they combine artistic practice, financial theory, and performative methods, which are sometimes borrowed from the world of magic.

On view at Tensta konsthall is a new work developed in collaboration with the writer Jonas Hassen Khemiri. Khemiri’s meta-fictional response to Goldin+Senneby’s ten-year practice will be read out loud at the konsthall every day at 14:12. In the short story The Standard Length of a Miracle, the narrator changes his name to Anders Reuterswärd, hoping to increase his chances of getting hired at a konsthall. At a brisk pace without punctures or breathing space, the reader gets thrown into a stream of consciousness where all associations are equally important. The short story’s monologue is connected to the installation of an oak in the gallery space. The tree refers to an oak that occurs in Khemiri’s text and also to the surrealist George Bataille’s secret society Acépahle, which is said to have gathered around an oak tree in the late 1930s. Acéphale—Greek for headless—has long been of interest to the artist duo and figures in their multi-year project Headless. Khemiri’s short story was published January 1 2016 in Dagens Nyheter.

The clothing line Anders Reuterswärd, developed in collaboration with Behnaz Aram, fashion and costume designer, will be on view in the entrance. The materials for the clothes originally come from garments left behind at dry cleaners around Stockholm. The clothing line will be worn by the konsthall’s staff during the exhibition as a new conceptual uniform. It will also be available for sale in the clothing store A Day’s March, located at Kungsgatan 3 in Stockholm. The clothes  are inspired by Reuterswärd’s quest to leave his job at the dry cleaner in order to focus on an artistic career. The artists have registered Anders Reuterswärd as a trademark at the Swedish Patent and Registration Office. The clothes will be accompanied by a new soundtrack composed by the musician Zhala, using sound recordings from dry cleaners.

Economic and financial structures govern our lives increasingly. But, for most people, terms such as repo rates, tax havens, and derivatives are abstract and difficult to grasp. The artistic practice of Goldin+Senneby masters economic strategies and thus punctures the idea that this kind of knowledge is too complex to acquire. Instead of rejecting the financial sector, the artist duo borrows market-inspired methods in order to infiltrate and illuminate the consequences of our late capitalist system and its neoliberal approach. The retrospective highlights the precarious labor market of our time, the increased commercialization of the art world, and the new all-time highs and stock market crashes within financial economics.

Standard Length of a Miracle is a mutating retrospective, meaning it will appear in different forms in different cities. The first, in Stockholm, activates Goldin+Senneby’s history thorough connections between their works and various institutions and activities in the city. Additional mutations are scheduled for Brisbane, Paris, and New York.

Part of the exhibition is Goldin+Senneby’s research project at the Royal Institute of Art in Stockholm, which is presented through the magic show On a Long Enough Time Line The Survival Rate for Everyone Drops to Zero (2015) and the magic box Zero Magic (2016).

New Visions, a group show of wall-based works, is shown collaterally at Tensta konsthall. It features work by the artists Rana Begum, Nadia Belerique, Monir Farmanfarmaian, David Maljkovic, Philippe Parreno, Adam Pendleton, and Yelena Popova. The exhibition is curated by Maria Lind in accordance with Goldin + Senneby’s desire to create a dialogue with their new works at Tensta konsthall.