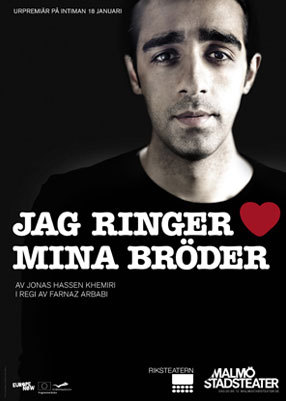 A car has exploded. A city has been crippled by fear. Amor wanders the city, doing his best to blend in. He must not attract any suspicious glances. But what is normal behaviour? And who is a potential perpetrator?

Over twenty-four hours, Jonas Hassen Khemiri’s explosive play explores where the lines between criminal and victim, and fantasy and reality, blur.

*****”Powerful and well written. Dynamic and amusing, with great sensitivity”/Anmelderiet

”There is as always a bite to the creative, original, unpredictable and sharp-witted Jonas Hassen Khemiri, the answer of Swedish literature to Zlatan Ibrahimovic” /Weekendavisen

“That’s what makes Khemiri’s play so vital a watch – it’s ardent in its empathy and acute in its accusations. In fact, it lets an audience damn themselves. We never find out anything about the bomber. /—/ Khemiri invites us to sketch out a terrorist in our mind’s eye. Who exactly do you picture? Exactly.” /What’s on Stage

“The writer’s style is cryptic, yet still sharp and spiked with playful humour. When he charts a path along which isolation can turn into alienation, his play assumes its most urgent relevance. We know that terrorism is a modern nightmare that has many dimensions, but this thought-provoking production shines a different light on it.” /The Reviewshub

“A maelstrom that you can’t pull away from.” /Rhein Main Presse

”I Call My Brothers is a text allowing actors to shine… a strong, very well performed piece.” /Andreas Jüttner in the Badische Neue Nachrichten

I Call My Brothers began as an essay published in Dagens Nyheter in December 2010, one week after a suicide bombing in central Stockholm that shook the nation. The book was published to great acclaim and later became a lauded play that toured Sweden with Riksteatern in 2013 (directed by Farnaz Arbabi) and premiered in New York in January 2014. It has also been performed in Norway, Denmark, Germany (multiple theatres), Australia, San Francisco, France, Spain, Belgium, Switzerland, Finland and at the Gate Theatre in London, UK.