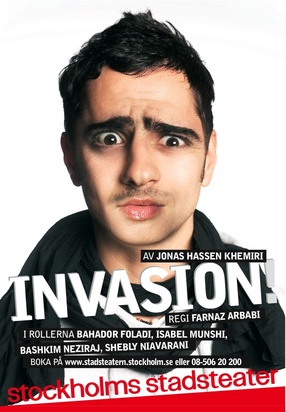 Invasion! is a tornado of words, images and ideas, all centered around a magical name: Abulkasem. The play assaults our deepest prejudices about identity, race and language. At once hilarious, disturbing and poignant, this deeply subversive play deconstructs a threatening identity – the Arabic male – and forces us to confront our own cultural identity.

Invasion! is Khemiri’s debut as a playwright. It was written for The Stockholm City Theatre, received splendid reviews and played two seasons of sold out performances. This drama debut opened the doors for Khemiri to participate at Royal Court’s International Residency in London 2006.

Invasion! directed by Farnaz Arbabi, is a production that dupes the spectator as it toys both with the illusion of theatre and all our preconceptions about theatre. It lends blood and body to current (and eternal) questions concerning where one belongs, language and identity. Jonas Hassen Khemiri’s whirlwind of thoughts and words twists so rapidly and intelligently that the play’s evolution from nonsense and hilarity towards the deadly serious draws the audience irresistibly in.
/The Jury for the 2007 Swedish Theatre Biennial

Invasion! has been translated and performed in Norway, France, Germany (Münchner Kammerspiele, Prinz Regent Theater, Bochum, Gostner Hoftheater, Nürnberg, Nationaltheater Mannheim, Hebbel Theatre Berlin and more), Austria (Schauspielhaus), South Korea and the UK (Company of Angels/Soho Theatre). In the spring of 2011 it opened in New York, with the Play Company and received raving reviews. Khemiri was awarded a Village Voice Obie Award for playwriting and the play returned to New York by popular demand for a second run. New York Times chose the play as a Critic Pick and reviewed it first here, then here (by Ben Brantley!) and featured Khemiri in a great interview and even asked him to create a A Hip-Hop Playlist That Helped Inspire a Play.

The play was chosen as a New York Times Critics Pick!

“If you’ve ever wished somebody would write a razor-sharp play anatomizing lazy paranoia about the Middle East―somebody has.” /The Village Voice

“Ask no more questions. Do not hesitate. This is without a doubt one of the best plays I have seen this entire season – and that includes Broadway, Off-Broadway and Off-Off-Broadway. It’s an extremely intelligent, linguistically complex, politically charged, attention grabbing, rapid-fire tour de force for each of its 75 sharply written, cunningly directed, and superbly acted and deliciously well received minutes.” /New York NearSay

“one of the best social commentaries in dramatic form of the past few years, and you owe it to yourself to see it as soon as you can.” /CurtainUp

“in the hands of director Erica Schmidt and in the voices and interpretative moments of all four ensemble actors, this play is funny, sad, and thoroughly engaging.” /Berkshire Fine Arts

“this is a high-energy, often hectic experience, with theatrical and political ideas bouncing off each other like pinballs.” /Backstage

“Snarky and subversive, Invasion! hits home without pulling punches (…) truly remarkable production (..) whip-smart and deftly dealt production and a must see for anyone who’s sick of America’s political dead weight and the present dramatic doldrums.” /Theasy.com

“exceptionally put together by the playwright who has entertainment as well as enlightenment of some very serious subject matter on his mind (…) the perfect production to wake you from those winter doldrums.” /OscarMoore.com

“When you’re in the hands of totally confident, committed theatre artists – well, there’s nothing like it. (…) The Play Company finds relatively unknown contemporary international playwrights with something to say. This is one of their best finds yet.”/Lighting&Soundamerica

”Invasion talks about the power of language and all the images it evokes. At times spectators could not tell what was fiction and what was real. What else can you expect from theatre?”
/Johannes Brecher in Darmstädter Echo Jugendtheater Darmstadt

“…«Invasion!» a perfectly timed play at the end of a campaign, where language, xenophobia and media repeatedly explore each theme. The play made me think, both during the performance and afterwards..” – Firda/ Sogn og Fjordane Teater

“Funny, eventful, easy-going and opinionated … its Swedishness brings a fascinating aspect to the play, but the universality of the themes remains.” The Finnish National Theatre, Silja Ylitalo /Maailman Kuvalehti

”Sometimes funny and sometimes heart-breaking, Invasion! is sweet and bitter like the reality we live in. Eventually the Invasion! can also be a hoax.”/Cosmoradio, Salonica Radio Station

“For those who love theatre, this performances is a challenge! They will leave the theatre satisfied and at the same time puzzled on what is happening in many contemporary , social matters.”/ Teatro blogg

“Just as linguistically intoxicating, entertaining and sensitive to underlying poignancy and helpless alienation as his novels… a brilliant display of dramatic talent. The actors and audience establish an immediate rapport.” /Dagens Nyheter

“Khemiri’s intelligently constructed drama makes it clear that he is not only a novelist (Ett Öga Rött and Montecore), but a playwright as well. Invasion! is as difficult to pin down as the name Abulkasem in the play, and we are summoned over and over again to look at people and their lives with fresh eyes.” /Svenska Dagbladet