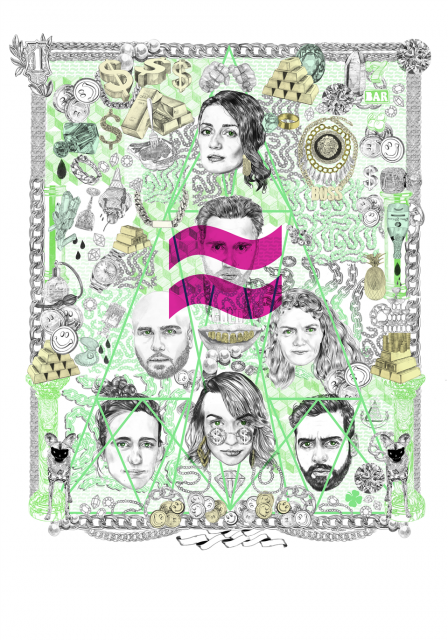 How much do you earn? Who do you serve? In Jonas Hassen Khemiri’s recent play ≈[Almost Equal To] we encounter a number of people who are colliding with the economy surrounding them.

Martina dreams about growing her way out of the contemporary economic system, Mani want to crush it. Andrei is looking for a job, Freja is seeking revenge. They all invest money in postage and pine nuts, fake bubbles and perfumes, strollers and utopias. Everyone seems invaded by numbers. How are we, our eyes, our words, our bodies affected by the economic system that surrounds us?

≈ [Almost Equal To] is a funny and brutal play that tries (and fails?) to give the audience a maximized entertainment value for every dollar invested.

“Moving Khemiri play is shaking up the market” /UNT

”≈ [Almost Equal To] speaks directly to our present time in a way that is original, witty and amusing.” /Fréttablaðið, National Theatre of Iceland

****** (of 6) “As rewarding as a therapy session, only much cheaper.”
“Almost Equal To is a play you really must not miss, as it addresses a theme we all come across in our daily life, that is, money.” /Kulturkongen, Odense theatre

**** “At Sukkerkogeriet, the circus comedy Almost Equal To exposes the ill-considered worship of the power of money symptomatic of our time.” /Fyens Stiftstidende

**** “At the Odense Theatre, it is ’the money or your life!!’’ The obsession with finance in our society made into a sparkling, consciously confusing circus.” /Gregers Dirckinck-Holmfeld

”Humorous and articulate criticism of capitalism: political theatre for our time”

“A well-performed, articulate satire about the power of money in our society” /Klassekampen

“So good it hurts /Romsdals Budstikke

“A cheerful, entertaining and thought-provoking game of theatre” /Vårt land

“Amusing and well performed about money and status ego” /Scenkunst.nu

“This is a provocative tragi-comedy, conceived with creativity, affection for the human condition, and a clear-eyed view of the barriers and falsehoods that block our promised pursuit of happiness.” /Talkin’ Broadway

Premiered October 23, 2014 at the Royal Dramatic Theatre in Stockholm, directed by Farnaz Arbabi. Performed until spring 2016.

Since then it has been translated and performed in Iceland, Germany (multiple versions), Norway (two versions), France, Denmark and the US.