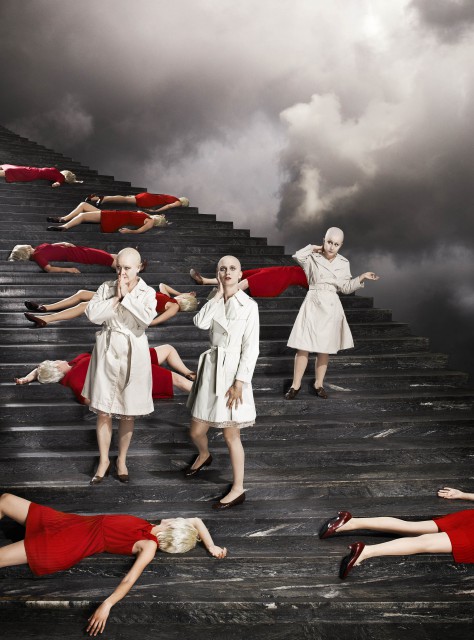 Three women, three stories, one person. Whose life is it anyway?

A young radical, a middle-aged housewife and an old sage battle to make sense of their lives through memory, imagination and fantasy.

Did they travel the globe or stay at home? Did they write revolutionary poetry or study dental hygiene? Did they bring down the system or accept the status quo?

“A howl of pain and sorrow” /DN

“Jonas Hassen Khemiri’s The Hundred We Are is a piece that eludes easy definition. It is surreal, playful and quietly devastating. It is about the multiplicity of the individual, the unreliable nature of memory, the lies that we tell ourselves in order to keep on keeping on, and the constant and lingering appeal of the road not taken.” /Post Script Journal

“Jonas Khemiri’s understated and poetic script, translated from Swedish by Frank Perry, creates a world of lost dreams, where our protagonist is crushed under the weight of suffering in the war-torn world, but equally trapped by the pressure of domestic duty that society expects from her. At times warm, at others desolate, it is provocative throughout. We’re finally left with a disturbing thought: the fear that we might betray our younger selves and miss the chance to fulfil our erstwhile dreams.” /The Upcoming

“Jonas Hassen Khemiri’s dialogue is pacey yet poignant and Jamie Harper’s direction is energetic and keeps the story moving with great pace. He uses every inch of the space creating pockets of immense claustrophobia in tight corners and under the feet of the front row. This is a lovely piece of innovative, clever and intimate theatre…a wonderful exploration of how easy it is to lose our self, our dreams and our ideals.” /LondonTheatre1

“Thematically simple and original in form, the play of a young Swedish playwright temporarily covers an entire life, and is spatially placed on the territory of the soul of a woman who decides to live her life anew. In the new incarnation there should be no compromises, boring family life, indulgence to domestic violence, dishonesty and insincerity.”

“Trine Wiggen and the three inspired actors give beautiful, captivating expression to this strong, original text, leaving the audience in a state of quizzical thoughtfulness.” /Dagsavisen

The Hundred We Are premiered at the Gothenburg City Theatre in September 2009, directed by Mellika Melani. In the spring of 2012 it opened in Stockholm. The play has also been performed in France, Germany, Denmark, Belgium and Norway (two different versions).

The first Norwegian adaption of The Hundred We Are was awarded a Hedda Award for best play in 2010. Motivation:

Productions of recently written foreign contemporary drama are not what we experience the most at Norwegian stages. The more of a joy is it that this year’s winner of this category is just that, a rather recent text – an original, uninhibited and merry comedy which in addition appeals to a wide audience.

A young and relatively new director, educated abroad, has signed a playful, transparently light and positively theatrical production in which the serious undertones of the text are promoted, near unnoticeably, but still with assurance. In dazzling interaction on equal footing, precisely paced and with unyielding nerve, three wonderful actors convey the diverse personality of the human being. The stage design is effectful and the costumes invite to using the imagination. What more can one demand?