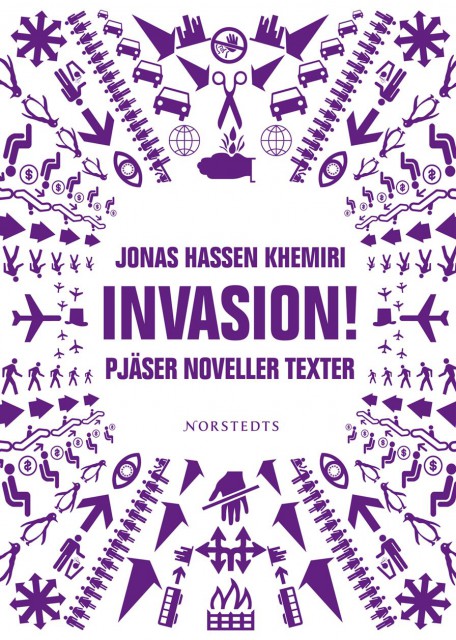 Invasion! is a collection of essays, short stories, and plays by an irrepressibly original and contemporary literary voice. Here we find Vanya, the world’s most sexually experienced after-school teacher whose personal collapse is chronicled through the eyes of his precocious protégées; Abulkasem, that multitalented enigma on the run; Harley, the childhood friend who balances on bridge railings and swears never to become like other people; and Milton, the pale ghost of cruel high school taunts.

Filled to the brim with linguistic dexterity and narrative originality, and punctured by passages of both hilarious and painful social commentary, Invasion! is a tinderbox of a book where fury is always bubbling just below the surface. With Invasion! Khemiri proves once again that he is a master wordsmith who has the singular ability to simultaneously punch us and pull us close.

“There is a wonderful sense of humor in Jonas Hassen Khemiri’s new book of prose and drama. His ironies are pointed in all directions and undermine our pre-conceived beliefs.”
– Svenska Dagbladet (SE)

“Literature appears to be alive, in our hands here and now.”
– Aftonbladet (SE)

“He has nothing left to prove anymore. Even a book of collected works like this one, which would normally pass by rather unremarkably, feels alive and fresh… It shouldn’t be possible to be this good.”
– Dagens Nyheter (SE)

“He is both blindingly brilliant and insistent, with his deceptive, ironic trap doors. (…) He must be the most authentic writer of my generation.”
– Sydsvenskan (SE)

“He is a surprising, almost acrobatic wordsmith. (…) Invasion! gives a thrilling insight into what is possibly Sweden’s most potent and masterly language laboratory right now.”
– Dalademokraten (SE)

“Everything Jonas Hassen Khemiri touches seems to turn to gold. And how would anything else be possible, with his talent.”
– Corren (SE)

“He must be the most authentic writer of my generation.”
– Sydsvenskan (SE)

“Khemiri’s greatest gift is his brilliantly energetic and masterly unbounded use of language.”
– Helsingborgs Dagblad (SE)